Megumi Hada, PhD, Senior Research Scientist, RaISE, Prairie View, Texas A&M. answers our questions on space radiation, how it affects astronaut health, and what her research can teach us about the biological effects of radiation here on Earth. 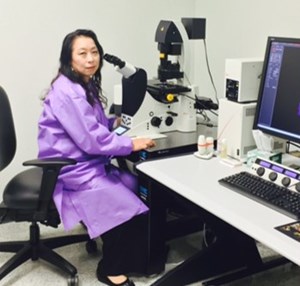 What is your role at Prairie View and how big is the team?

The Radiation Institute for Science and Engineering (RaISE) is a state-of-the-art laboratory newly established through the Chancellor’s Research Initiative (CRI) of the Texas A&M University System to enhance the capabilities of radiation biology research at Prairie View A&M University (PVAMU). I am a Senior Research Scientist as part of CRI/RaISE. I joined this team in March this year. We have just started this lab. We are small group right now, still in the process of recruiting more scientists and laboratory technicians.

Can you talk about the goals of your research?

The relationship between biological effects and low doses of absorbed radiation is still uncertain, especially for high LET (linear energy transfer) radiation exposure. The goal of my research is to understand DNA repair mechanisms for low dose high LET radiation exposure. This knowledge will not only lead us to develop better protection of astronauts from space radiation, but also to develop better ways to treat cancer, prevent radiation induced cancers, or delay the appearance of secondary cancers by cancer therapy.

We need to know frequencies of chromosome aberrations induced by radiation. We use CytoCell Whole Chromosome Painting probes. Since we are dealing with very low dose exposure, we need to analyse at least 1000-2000 spreads in each sample. In order to speed up analysis process, we use chromosome 1, 2 & 4 combination paint, and from these 3 chromosome analysis, we get aberration frequencies as whole genome equivalency.

At the lab, you create simulated radiation conditions – and then test. Can you explain how you do this?

Space radiation environment is drastically different from the kinds of radiation we experience here on Earth, such as x-rays or gamma rays. Space radiation is comprised of atoms in which electrons have been stripped away as the atoms are accelerated in the interstellar space to speeds approaching the speed of light – eventually, only the ionized nucleus of the atom remains.

Can you describe your relationship with the astronauts and/or NASA and how this project got started?

I have been working with Human Health Program (HRP) at NASA Johnson Space Center (NASA-JSC) for over 11 years until I moved to PVAMU. At NASA-JSC, the main focus of my research was on how to protect astronauts from space radiation exposure by developing counter measures and risk assessment. Our team members at RaISE also worked at NASA before they joined PVAMU. We are interested in effects of space radiation environment modelling and studying biological consequences on humans.

Have you been able to test any astronaut samples following a space mission?

As part of our research work in the Space Radiation Health Project lab at NASA-JSC, our group has been analysing chromosome aberrations in lymphocytes from astronauts’ blood samples. Typically, blood was drawn before and after their space missions and frequencies of translocations were studied. Also we expose astronauts’ pre-flight blood to γ-rays in ex-vivo to make dose-response curves for each individual astronaut.

Space radiation environment consists of several high-speed particles that can tear through DNA molecules, splitting them. The damaged DNA can lead irreparable consequences that can lead to cancer or other diseases. Radiation exposure can be acute (a high dose in a short period of time) or chronic (low levels of radiation over a long period of time). The amount of space radiation an astronaut may be exposed to while orbiting the Earth in the ISS depends on a number of factors: Inclination of the orbit, Altitude above the Earth, and the Solar cycle stage and solar activity. Data collected by NASA and a Russian-European collaboration shows that astronauts on the ISS are subjected to about 1 mSv of radiation per day, about the same as someone would get from natural sources on Earth in a whole year. Future missions to Mars predict much higher exposure, but also depends on shielding, mission duration and solar minimum vs. maximum. Longer missions will have more risks to astronauts’ health. One mission to Mars could expose an astronaut up to 1000 mSv in about three year possible round trip time or about 2/3 of his/her safe life time limit of radiation.

Annual radiation doses for aircrew are estimated to be around 4 mSv. An abdominal CT scan is about 10 mSv. Although pilots and flight attendants receive higher than the normal population, they are exposed to much lower dose contribution compared to astronauts at a higher altitude (space station) or deep-space (lunar exploration) in the past missions.

What kind of protection does the astronaut today have from radiation? What were the health problems that early astronauts faced?

Radiation inside the ISS is due to both primary particles in space and secondary particles generated by the aluminum hull, into the living quarters. Our ISS has also been fitted with additional shielding such as polyethylene blocks and water containers that can provide additional shielding. This lowers astronaut exposure by a few percent points. Although the different methods of space radiation shielding have been examined, there is no single good solution that currently exists to adequately protect astronauts from the radiation environment of space.

Some astronauts have developed serious, permanent vision problems from their time in space at an early age. The longer the mission, the greater the chance of change. Of more than 300 astronauts studied, about 30% who spent two or more weeks in space at different altitudes and different inclinations developed vision problems. More than 50% of astronauts who spent more than 90 days in space reported to have vision related problems.

Is the radiation exposure they experience chronic throughout the mission – or are their parts of exploration that present a large dose of radiation?

Radiation exposure will be chronic, but when a solar flare or a coronal mass ejection occurs (the two often occur at the same time, but not always), large amounts of high-energy protons are released, at times in the direction of the Earth. When these high energy protons from Solar Particle Events (SPE) enhance the radiation belts of the Earth, there is significant increase in the radiation dose at ISS. We cease all extra vehicular operations and safeguard our astronauts in the space station at more secured highly shielded areas for protection. If any such SPE occurs while we are in transit to moon or deep-space, we really do not know how to protect our astronauts yet. In the past lunar missions, we barely missed such disastrous events as they occurred between two successive lunar missions.

Can two astronauts on the same mission have very different reactions to radiation exposure?

Each astronaut has different background level of chromosome aberrations, and also an individual’s susceptibility is different. We are still working on understanding what really makes one person more susceptible to the effects of space radiation than another person.

Would you travel to space if given the opportunity?

Carmen Vokaty, Assistant-Chief Medical Technologist in Cytogenetics at the McGill University Health Centre, details how her lab incorporated OGT’s Cytocell Tissue Pretreatment kit into its workflow after struggling with a homebrew solution.

FISHing with the real-life laboratory experts