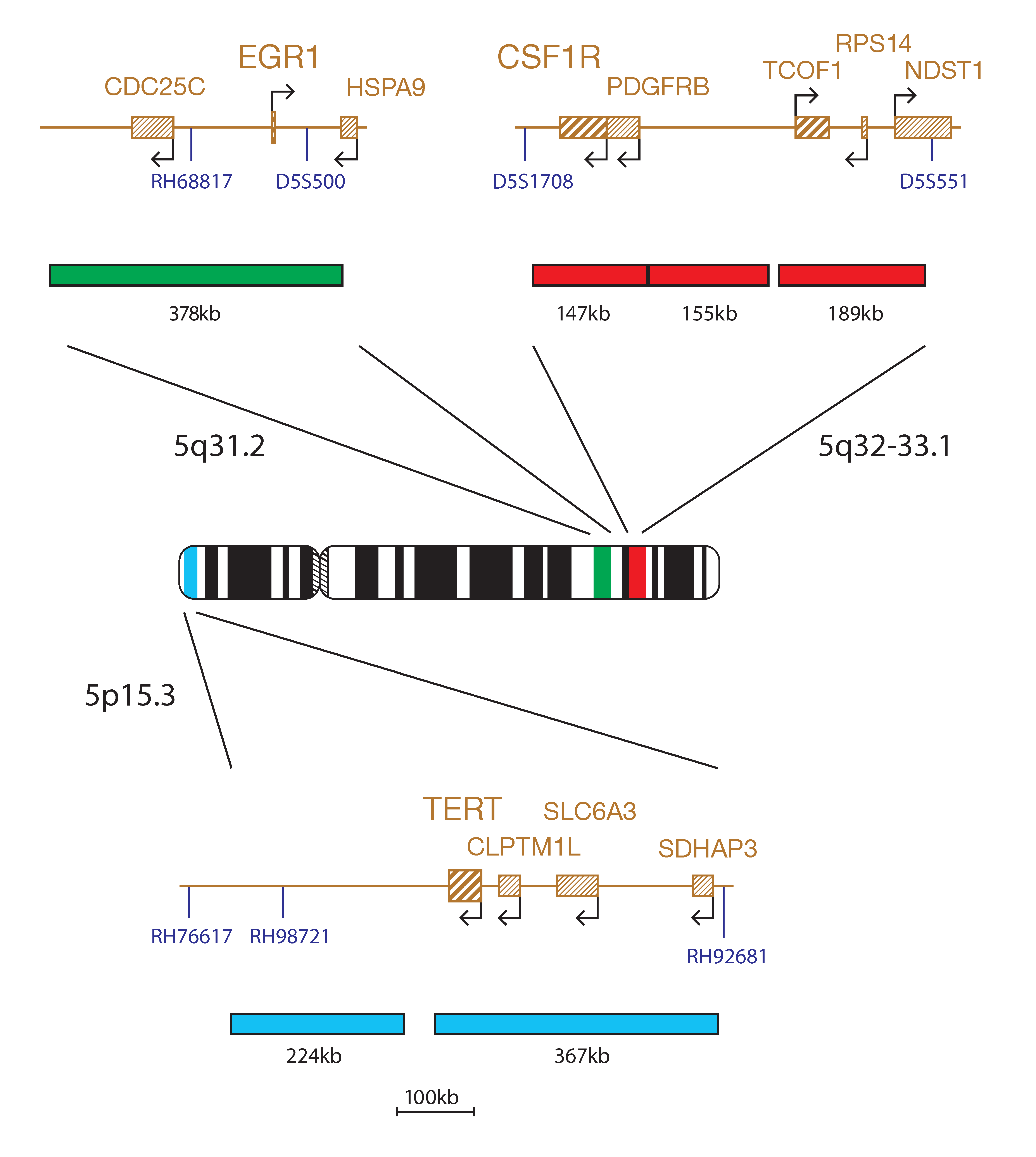 Deletions of the long arm of chromosome 5 are one of the most common karyotypic abnormalities in myelodysplastic syndrome (MDS) and acute myeloid leukaemia (AML) with myelodysplasia related changes1,2.

A subset of MDS patients with del(5q) as a sole cytogenetic abnormality, or with a single additional abnormality not involving chromosome 7, have a consistent set of clinical features, termed the 5q- syndrome1. It is the only MDS subtype defined cytogenetically in the World Health Organization classification system. This clinical entity with <5% blasts has a more favourable prognosis. However, patients with del(5q) associated with other cytogenetic abnormalities, or with excess blasts, have an inferior survival2,3.

In contrast to de novo MDS, prognosis of AML with del(5q) is generally unfavourable, especially when seen as a part of complex karyotype4. Deletion of 5q is also commonly seen in treatment related t-MDS and t-AML where prognosis is particularly poor1.

Two chromosomal regions have been mapped on chromosome 5q in MDS and AML. One common deleted region, at 5q33, is associated with the 5q- syndrome. Another, more proximal region located at 5q31, has been linked to a more aggressive form of MDS and AML and is often accompanied by additional cytogenetics abnormalities and a poorer prognosis1,3,5.

The CytoCell Del(5q) Plus Tri-Colour Deletion Probe will detect deletions of EGR1 (early growth response 1), a tumour suppressor gene at 5q31. EGR1 has been shown to act through haploinsufficiency to initiate the development of MDS/AML6. The probe will also detect deletions of RPS14 (ribosomal protein S14) at 5q33.1, patients with MDS with del(5q) are haploinsufficient for RPS14 which leads to impairment of ribosome biogenesis and affects translation of genes and activation of proteins involved in differentiation and apoptosis4. The TERT (telomerase reverse transcriptase) gene probe at 5p15.3 will help distinguish cases with del(5q) from those with monosomy 5.