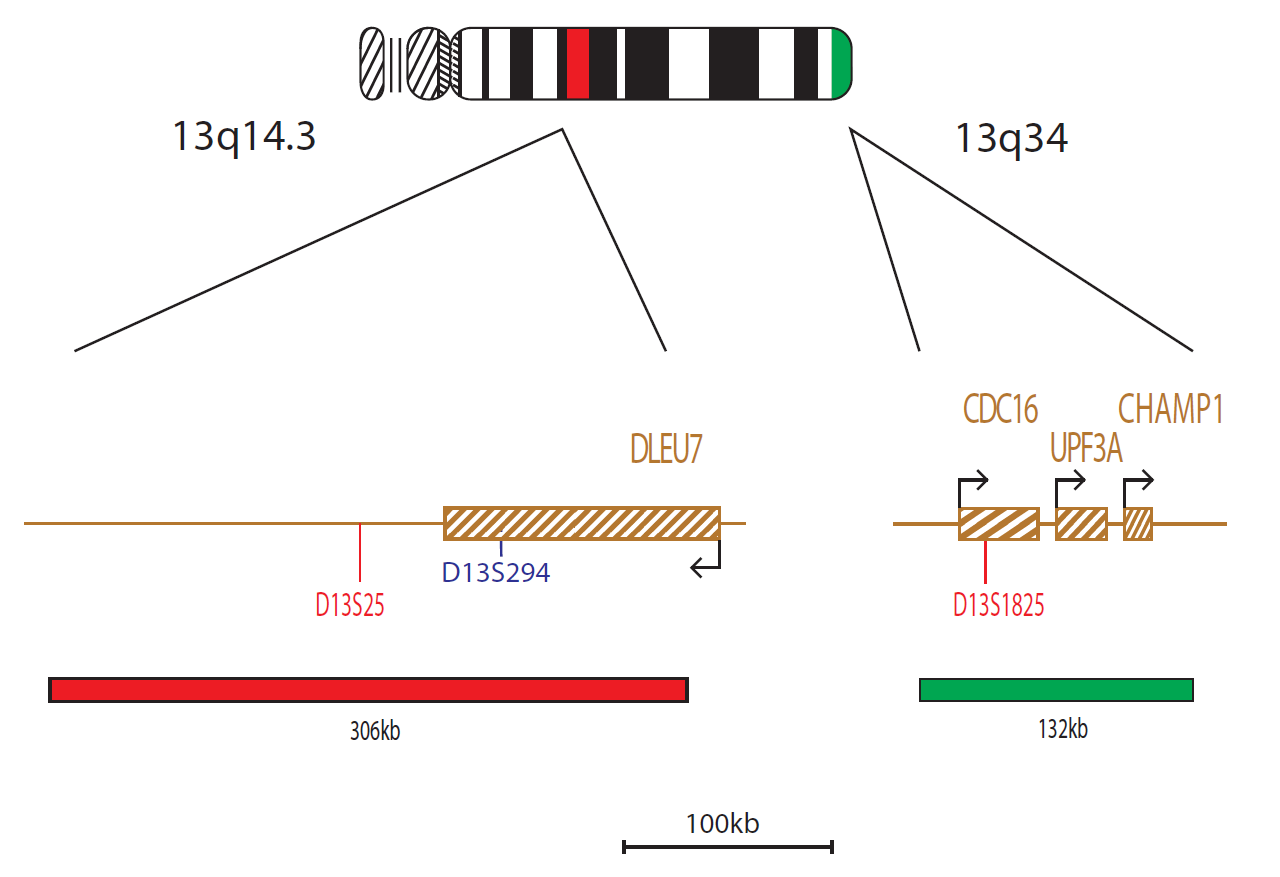 The D13S25 probe, labelled in red, covers a 306kb region including most of the DLEU7 gene and the D13S25 marker. The 13qter subtelomere specific probe (clone 163C9), labelled in green, allows identification of chromosome 13 and acts as a control probe.

Rearrangements leading to the loss of all or part of the long arm of chromosome 13 are seen frequently in a wide range of haematological disorders.

Chromosome 13q aberrations occur in 16-40% of multiple myeloma cases (MM), most of them being complete monosomy 13 (85%), while the remaining 15% constitute deletion of 13q1.2,3. A case study of multiple myeloma patients narrowed down the critical deleted region to 13q144. Historically, deletions of 13q have been associated with poor prognosis in MM but now it is believed that its prognostic relevance may be related to its association with other concurrent genetic lesions3,5.

Deletions affecting 13q14 are also the most frequent structural genetic aberrations in chronic lymphocytic leukaemia (CLL)6,7,8. This region is found to be heterozygously deleted in 30-60% and homozygously deleted in 10-20% of CLL patients9. The survival rate has been shown to be similar for the two groups10. Patients with 13q14 deletions are classified as very low risk, in the absence of any other genetic lesions11.

Two non-coding RNA genes, DLEU1 (deleted in lymphocytic leukemia 1) and DLEU2 (deleted in lymphocytic leukemia 2), plus the genetic marker D13S319, span the pathogenic critical region of 13q1412. DLEU1 is considered to be the most likely CLL-associated candidate tumour suppressor gene within the 13q14 region13. Subsequently, D13S319, located between the RB1 gene and D13S25 and within the DLEU1 locus, was found to be deleted in 44% of CLL cases14. It has also been postulated that a gene telomeric to the D13S319 region, encompassing D13S25, may be important in cases with hemizygous deletions and that this gene is a putative tumour suppressor gene15.